Allocate work to your team by dragging and dropping Tasks, Projects, Tickets, Sales, and Periods into their Schedules. Easily distinguish how you would like the work to appear on their schedule, and even split large Tasks and Projects between multiple users.

Using this guide, you can:

How to Allocate Work

After you find the right person for the task, easily put it in their schedule. Drag and drop work from the left side of the screen onto a user's schedule on the right to allocate tasks.

You will be prompted to choose the way you want to allocate this work in a drop down window.

What if my team is on Vacation?

If it's not a usual work day for your team, you will receive a warning letting you know they may not be available for that day.  Accelo will not prohibit you from assigning something on that day, but we will give you a yellow warning. To add dates to your personal Leave Calendar, click on your User Profile Icon > Preferences >  and go through your Vacation Calendar by month. Click the date and enter the time you will be out of the office.  Holidays are automatically marked off your calendar.

Use Accelo's sophisticated dynamic scheduling feature to assign out work, or be more specific in how you assign time to work on a task. Designate how you would like the work to appear on your team's schedule, and even split larger Tasks between multiple users.

When you drag and drop a task into a user's schedule, you'll be prompted to choose whether to Commit, Schedule, Assign or Split a task. 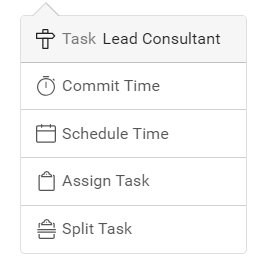 Allocate an exact amount of time to be worked on by that person at some point during the day. Prioritize work on a task by designating more time to a task on a particular day.

Committed time will appear on the user's Timesheet and Task List, making it easy for them to see what they should be working on and easily log their hours.

Committed time appears in Dark Blue in the User's Schedule. 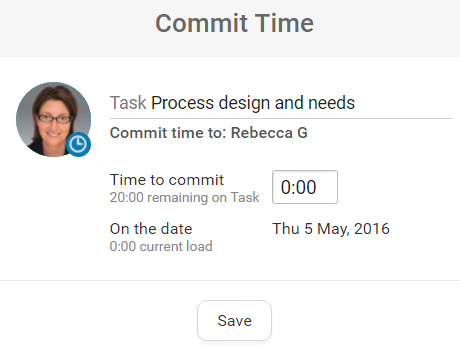 Choose a specific time and date for the work to be done. This will create a meeting on that User's schedule for that time block. This meeting will appear on the user's Timesheet and in their Inbox.  The user can then log their time against this task by creating a Meeting Report once it it has been completed.

If you are integrated with Google, Outlook or Office365, this scheduled meeting will also appear within their calendar.

Scheduled time appears in Yellow in the User's Schedule. If the task was already assigned to another user, you will be prompted to Re-assign Task.

Assigned tasks appear in Green in the User's Schedule.

Share the load for a large task by splitting the task between its existing team member and the new team member you're dragging it onto. The time remaining on the task will be automatically split evenly between the two users, but you can re-allocate the time as needed.

Allocate Work from a specific Project

When setting up a new project, you may want to allocate work to be completed on that project right away.

To allocate work from a specific project, simply navigate to the project you want to view, and then select the Schedule Work button, near the bottom right of the screen. How helpful was this page?
4.2 (Based on 15 ratings)
Accelo uses cookies to give you the best possible experience - by clicking 'Continue' you agree to our use of cookies. Refer to our Privacy Policy for details. Continue