Last week we made a number of improvements to Accelo, covering a lot of different areas in the product! From fixes for unusual bugs in Global Search, Attachment Relocation, Invoice Editing and Reestimating Time, improvements to our Sales Reporting, Timesheet Reporting and Project Planning screens and even catching problems in other systems like QuickBooks and giving our user better notifications, members of our team has been busy making a bunch of little improvements while the rest of the crew focus on our Q4 priorities.

We found - thanks for a few client reports - that our powerful global search feature was finding information that had been "unset". Because many fields in Accelo are optional - fax number, anyone? - we were being pretty tolerant of information coming in empty, and in effect "not" setting the search index for document values that weren't set. Unfortunately, a side effect of this behavior meant the fields you deliberately removed - such as removing an email address - were still living on in the search index and matching when you performed a search. This wasn't affecting features like email capture and it was working properly whenever you updated a value - and now, with this fix you unset or remove values and the search index will report correctly too.

We've received a bit of feedback lately that the way Accelo has been calculating its values in the Sales Dashboard and Pipeline reports could be better. Until now, the way Accelo calculates the pipeline value of a sale is by multiplying the value of the sales opportunity - say $10,000 - by how far through the sales process it is (the progress). The Progress percentage is defined by each sale status, and it means that a sale that is, say, half way through your sales process would have a pipeline weighting of 50%; taking our example, this means the $10,000 sale is weighted in the Dashboard and Pipeline export at being $5000 worth of forecast future income.

Unfortunately, this "one size fits all" model isn't ideal for all or our clients, so we've now made the choice of weighting for a sale configurable through the Settings screen in the Sales module. You can now choose between five different settings:

In addition to this preference setting, we've also changed the representation of the values in the Funnel part of our Sales Dashboard. While we're still grouping sales based on their Progress through the phases, we're now not reducing or scaling back the value of the opportunities in the funnel report - this means, while the $10,000 sale that is at the 50% progress mark would be shown in the 40%-60% band, its value (contributing to the total) will now be the full $10,000 instead of the $5000 value we were using before. Our reason for this change is that we're already giving a sense of where the deal is in the funnel through this interface, so there's no need to then discount the value of the deal a second time!

Attachments not always moving when request is converted to ticket

Under the hood, we use the standard Activity Relocate process when moving activities/emails from a request to an issue during conversion. Our team noted that this will pick up attachments and move them too if the attachment is only linked to the activity you're trying to move.

This is normally a good thing - if you have a common file, or something that is part of your email signature that's been captured as image001.png, you don't want to move it from the original location and force it into a single ticket - but we’ve been troubleshooting some cases where the attachment is against two Activities (usually because your email client includes embedded images when you reply as part of the original message you're quoting), but they're part of the same conversation and on the same object (the request).

What we’ve done is loosen up the relocate file rules to accept resources attached to multiple activities if they're part of the same thread which should solve this for the most common real examples, without accidentally having a given ticket claim common images too aggressively.

Within the Accelo Client Portal, it is possible for your customers to submit Requests and to indicate a priority level on the request. These priorities were then intended to feed into the priority of the issue/ticket - in the event the request was converted. Some time ago we made it possible to customize the Issue priorities, which means it is possible to confuse the link between the Request and Ticket priorities. To avoid this happening any further, we’ve effectively deprecated request priorities (which were not configurable) in favour of using the same priority levels as the Issues/Tickets module.

Please let us know if you’re interested in seeing more exposure of the Request priority feature within Accelo - we think this feature deserves a little more love and attention, but we’d like your guidance & feedback first! 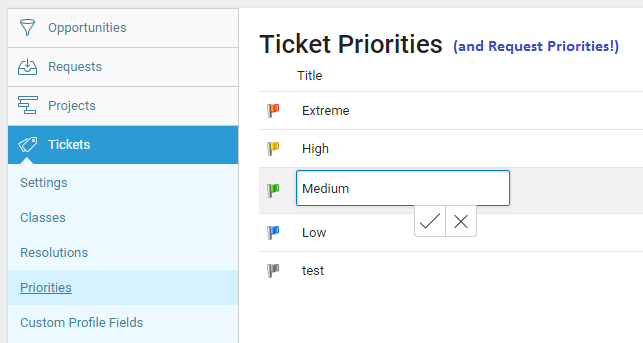 In the lead up to overhauling (and massively improving!) Accelo's invoicing features, we spent some time simplifying and standardizing the concept of "materials" across Projects, Tickets and Retainers. This allowed us to introduce new concepts such as linking project materials to a retainer so they can be billed under a retainer period. While the material linking automatically chooses a current retainer period, a few keen customers noted it wasn't possible to manually select a different period. It turns out that we'd already built the functionality, but the option to open this relocate modal had become hidden in the UI when viewing a list of project or ticket materials.

Every time an invoice is changed in Accelo, the system will generate an updated PDF invoice. This re-generation can take between a few seconds up to a few minutes - depending on whether Accelo has to wait for the invoice to sync with an accounting system. While we’ve had these notifications in place for some time, we weren’t showing them correctly if you’ve just edited an invoice - instead we were continuing to show the previous PDF and then suddenly replacing it when the new PDF finished generating! To avoid accidentally downloading or sending the old PDF, we’ve ensured it becomes hidden from the left-hand side of the View Invoice screen after editing the invoice, and are showing accurate notifications there too.

A little face-lift for the Timesheet Report screen

Our team of designers and UX developers are often busy putting together mock-ups and fleshing out concepts for new screens, but they're also aware of some places within Accelo where more recent styles or UX patterns haven't been applied. We've recently caught up with the Timesheet Report screen to apply some newer icons, fonts, colours and smoother layout to ensure skimming through staff, project and client timesheets is quicker and more aesthetically pleasing than ever! 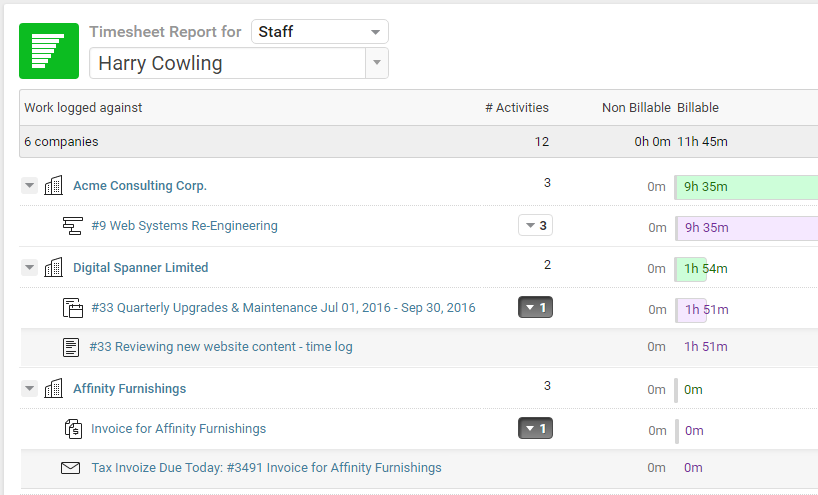 The standard export includes 26 columns of data which is somewhat information overload when you're just exporting data for some basic reporting, wanting to share timesheet details with a client, or perhaps transferring data to another system. So we've implemented a light-weight version of this export which has 14 columns focusing on the more essential details, and omitting things like activity ID, status, cost & profit (which are all still available in the standard export). The other big benefit of this trimmed-down report is that it's faster to execute and download.

Accelo's project planning screen allows you to quickly build out milestones & tasks - setting their titles, duration, start and due dates directly on the tabular planning view. However, configuring the hours & budget value for each row involves more complex settings which are only available within a pop-up view. To reduce the friction involved with editing budgets, we've made a small change so that simply clicking on the Budget or Hours column will now open the pop-up with the Budget tab in focus.

Nearly every type of object in Accelo supports the use of special email aliases, and we’ve just extended this feature onto the Assets module. From outside Accelo, adding this special address in the Cc (or Bcc) line when sending emails will direct Accelo to capture your email conversation against the Asset - even if there is no client contact recipient. Note the handy “Send to Addressbook” feature - this will push the Asset as a contact into your Google/Outlook contact list so you can easily identify the alias using the title of the Asset (you don’t need to remember the special alias ID/email address!) 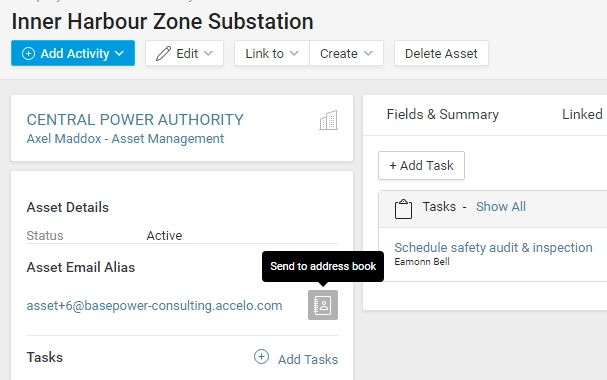 The ability to include services, materials and expenses from multiple projects and tickets on a single invoice makes invoicing in Accelo much faster than in the past. However it’s also meant that the invoice line items require special grouping to ensure the components of each project or ticket are clearly marked in the customer (PDF) invoice. In the event that such an invoice required editing, this additional formatting was missing from the edit screen and the subsequently saved invoice/preview.

Notifying QuickBooks users when invoice fields have been truncated

Generally, Accelo has generous limits on the number of characters allowed in fields across the company, contact and invoice objects. However, Quickbooks' API has much smaller allowances on the length of fields. For example, they allow up to 50 characters in the name of a company, so a company in Accelo by the name of:

A few weeks back our team updated our integration to truncate fields that QB considered too lengthy. This doesn’t affect the data in Accelo - just the data that is pushed to QB. The additional change made this week is about notifying you (the invoice owner/creator) via a quick email, anytime truncation occurs.

Whenever a meeting (or scheduled activity) is created against a task, time is not actually recorded on the task until a meeting report has been logged. Likewise, the Estimated Time Remaining on the task remains unchanged until a report (with billable time) has been logged. However, at the point of saving a meeting report with, for example, 1hr of billable time, 2hrs was being subtracted from the task’s time remaining.

Learn How We Use Our Own Software Every Day

Our product is versatile enough for everyone to use, including...
19-Jun 2018 • Product

Update: Having problems reconnecting? You may be using Accelo connected...
6-Feb 2013 • Product
See how accelo can work for your business.
Try Free
How helpful was this page?
4.2 (Based on 11 ratings)
Accelo uses cookies to give you the best possible experience - by clicking 'Continue' you agree to our use of cookies. Refer to our Privacy Policy for details. Continue