Connecting your Google Contact list with Accelo is one of the first steps we recommend when starting out, so that the customers, leads, and vendors you deal with regularly are brought into Accelo with ease, paving the way for you to start tracking sales, projects or tickets for those contacts. But it’s not just a run-once tool - you get the benefit of contacts created in Accelo being pushed to your Google list too, so you’ve got their phone, email and address details at your fingertips.

Google has recently retired their legacy Contacts API and released a new version known as the People API. Although the capability of the API is largely unchanged, the Product Team took the opportunity to refine some of our contact integration features as part of the migration. 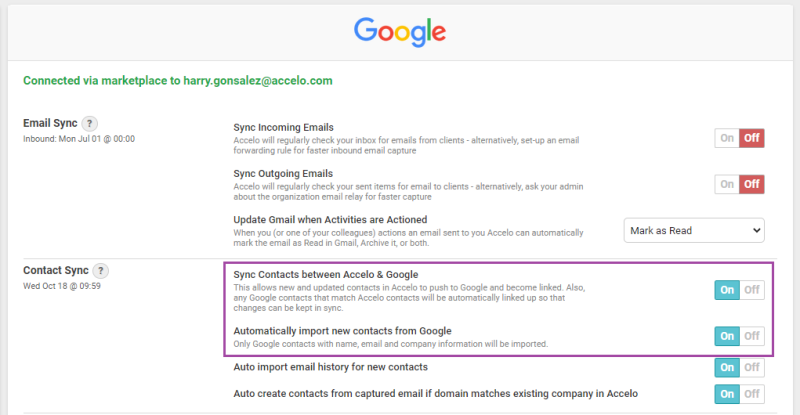 We have simplified the “Sync contacts” function - by combining two settings into one with an on/off toggle. When enabled, it will allow:

Continuing to maintain separate toggles for these functions was not in anyone’s best interest considering that the vast majority of users had both enabled - which is fortunate because when only one option was enabled it could lead to unexpected sync behavior.

If both options were previously enabled, you will find the new consolidated setting will also be enabled. If only one setting was previously switched on, it will be disabled by this upgrade until you turn it on.

Prior to the update, each time you linked a contact with a company in Accelo, that new relationship would create a new contact in Google. If one contact has three company relationships in Accelo, it would result in three contacts in Google.

Now, we push a contact once and will save the additional company relationship details (emails, phones, and addresses) against the original contact in Google. This is great for ensuring the data in Google more closely resembles what’s in Accelo and reduces duplication.

On the flip-side, when extra email addresses are added to a Google contact, Accelo can now create a new company link on the same Accelo contact to record the additional email, phone or address information, all without creating duplicate contacts.

We've also made the decision to retire the Import Wizard. The Import Wizard was a manual process that required each user to initiate to import contacts, then manually review all of the contacts we ingested from Google before they would go into Accelo - a task that busy people rarely had the time to complete. Instead, we've improved the Automatic Import option to be more robust and we continue to invest in improvements to the CSV import features where your team can import their company and contact data in one go.

Users who were previously using the Wizard import option will have their Automatic import setting now "Disabled" - considering the Wizard required user interaction to complete the import. For those using the Automatic option, this doesn't mean Accelo will import everything from Google though - we only bring in contacts that have a Firstname, Lastname, Email and Company set in Google.

From an architectural standpoint, we’re now using an intermediary data layer to manage the flow of contact information between Accelo and Google. This change helps mitigate a challenge when connecting data between a multi-user system with complex contact and company relationships, like Accelo, and a single-user system that has a simpler view of the contact world, like Google. The benefits include:

While there’s no urgent action to be taken, we hope this information provides best practices on how to best utilize the Google Contact Sync features, and which settings to be adjusted.

Q:  When will these changes take place?

A:  The update has been completed and is available to customers.

Q:  Is Accelo now getting faster updates from Google via webhooks technology

A:  No. Google doesn't allow webhooks at this time.

Q:  Is the “For contacts synced with me, also sync to the following users” feature still available?

A:  This feature is being retired as it was widely unused, and often considered bad practice as you could force contacts to be created in other users' accounts whenever you had a contact push to your own account.

A Client Portal: Could It Be What Your Service Business Is Missing?

When researching software, there’s no better source of truth than…
4-Aug 2022 • Product • Tech for Business

Our 21st-century lives are full of automation.&nbsp; Robot vacuums clean…
19-Jul 2022 • Product • Tech for Business
Try Accelo for 14 Days
Fast and easy setup No credit card required
Get Started Now
Schedule a Live Demo
Tailored to your business All questions answered
Request a Time
Accelo uses cookies to give you the best possible experience - by clicking 'Continue' you agree to our use of cookies. Refer to our Privacy Policy for details. Continue