The last quarter has been the most transformative in our company history: just 5 short weeks ago we introduced a whole new company and product to the world with the launch of Accelo. Built on 4 years of lessons learned building AffinityLive, the new product and company name has been amazingly well received by our users and the broader market, with existing user usage up 15% month-on-month and cancellation rates down by two thirds. New trial requests were also up 14% in what is traditionally a slower time of year with Thanksgiving and Christmas as folks focus on family time and finishing out the year.

Looking ahead, we're incredibly excited about building on the new foundation of Accelo to make it even easier for millions of professionals around the world to do the work they love. To give you a sense of what's around the corner, I wanted to share a few of our priorities for the first quarter of 2016.

While we managed to ship the first half of these priorities yesterday, we've still got more to share around utilization and profitability reporting in Q1. At its core, running a successful professional service business is about having great people who are focused on doing great work for clients. In a financial sense, this means having everyone as highly utilized as possible on doing profitable work, but today it is just too hard for managers to actually know what their team's utilization and profitability look like until the accountants do their work weeks or months after the fact. These new dashboards will work hand in hand to help managers see the performance of their teams (including in the case of utilization forecasts into the future) so you can see what's going on in real time and around the corner in time to do something about it.

The most common negative comment we've received since the upgrade to Accelo centered around speed or the performance of the product.

For the non-technically minded of you, we've heard your comments loud and clear, and while we've been shipping numerous incremental improvements during the last few weeks, we're doing a lot of optimization work over the Christmas and New Year period (and into Q1) as a top priority.

For the more technically-minded of you, the biggest change in the Accelo upgrade was the move to more client-side workload - instead of having big pages that download most of the data for your browser to display (and your browser showing you a white screen while it downloads), we've now got much more lightweight (and much faster loading) pages which then pull in more of their data as AJAX payloads. This is then crunched and rendered in the browser using a library called AngularJS - and in theory it is much faster.

Unfortunately, the reality of moving more workload to the client-side doesn't always work out this way. We were initially caught out by Ad-Blockers which inadvertently blocked requests to some of our API endpoints (one of our objects is called an affiliation, which is a wildcard block word for some ad-blockers); this causes pages to "hang" for up to 30 seconds while things in browser-land timed out. Another bottleneck has included the way some of our legacy JavaScript code (for example, Timers) were running in parallel with Angular; we'd have fully loaded data into the page from the API endpoints in under a second, but libraries like requireJS (and more monolithic packaging and compile approaches) were causing delays in screen paint of 3-4 seconds. The final bottleneck we're looking to improving on is the compile speed of AngularJS - v2 is due out very soon and promises massive performance improvements by working in at a much lower level with browser rendering engines (and lots of other improvements).

I've described the path of building a SaaS app like Accelo as a bit like building a road from A to B. When you initially cut the path through the trees and you've got a dirt track and rope bridges you notice and get frustrated by the remaining stump or two. When you upgrade the track to a 2-lane road and wooden bridges, the lack of overtaking lanes and rough surface drive you crazy. Then when you've upgraded it to a 6 lane motorway it is the potholes and torn tires on the road that raise your ire!

While we've long wanted to make improvements to the billing and invoicing parts of Accelo, we decided to take the time to get the user-experience across the product right, and by raising the standard, the shortcomings - or potholes in the analogy - of our current approach to billing has been exposed as more of a pain point, one that we're going to be throwing a lot of resources into fixing in Q1.

Some of the things we'll be prioritizing and improving include:

To facilitate these improvements - and other things we want to do next like automated recurring billing, for example - we're going to be completely re-building our billing back-end. As a result, the improvements above involve a lot of other enhancements behind the scenes which will position us well for even more around reporting and intelligence in the months beyond Q1.

While the Accelo web app had a massive amount of work packed into it in Q3 and Q4 of 2015, there wasn't as much bandwidth available to invest into our mobile apps. In Q1 of 2016 we're aiming to deliver a number of significant enhancements to our mobile apps, including:

Another area of improvement we're prioritizing in Q1 is around our popular triggers functionality. Improvements include:

Timesheets are a critical part of Accelo, and we've been wanting to bring together the things our users love about our old workhorse the "Work Screen" with our new Timesheet functionality. This "Single Day View" is something we've had a few starts at but haven't pushed through to completion because we've wanted to spend the time to get it right and other priorities (like completely redesigning and relaunching the product) took the focus of our UX team.

This quarter our UX team are chomping at the bit to bring to life a whole new single day view so users can combine all the automation and signals from Accelo (open tasks, clients were activity is captured automatically) with a beautiful way to log time and work.

Today, there's too many places in Accelo where making a small (or even a medium sized) change still requires a full screen reload, making routine updates and changes longer to complete than they should.

We want to let you focus on doing the work you love, not laboriously updating contact records or the status of a sale through two or more full screen reloads, which is why we're working this quarter on making better use of in-line editing and dialog boxes. 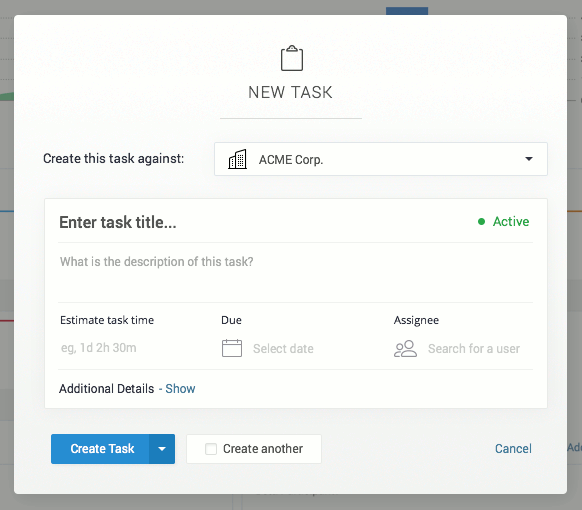 Similarly to the improvements for creating, editing and changing status above, we're also going to be working on editing lists of items in Accelo in a bulk fashion. Obvious examples include adding a whole bunch of companies to a category like "VIP", or updating a profile field like "Follow up after" to be a particular date. We're aiming to introduce bulk editing for all lists of companies, contacts, sales, projects, tickets and retainers - watch this space for more details!

Another area of priority in Q1 is user engagement, and more specifically ways for our users to help their colleagues get more value out Accelo. These projects include implementing a new Invitation system so colleagues can invite each other into use the platform, and the ability for users to automatically get copies of activities or emails sent to them whenever they've followed or favorited the client, sale, project, ticket or retainer the activity is logged against.

Here's another round of tidy product updates and fixes, with…
1-May 2019

Accelo's team of talented engineers have listened to your concerns…
23-Aug 2017
See how accelo can work for your business.
Try Free
Accelo uses cookies to give you the best possible experience - by clicking 'Continue' you agree to our use of cookies. Refer to our Privacy Policy for details. Continue