Accelo's project management tools offer some powerful settings for automatically adjusting the running schedule of a project when work is started, is delayed, or finished early. Over the last few months of listening to customers, we've identified some situations where our guesses on how the system should adapt to change needed to be adjusted to make project management more intuitive and automated.

Disclaimer: This post covers some pretty advanced project configuration topics, such as Accelo's date acceleration & prediction system as well as the auto-start milestones/tasks feature. Not for the faint-hearted! If you've got questions about a specific project of yours, feel free to email support@accelo.com with a link to the Project in question and a screenshot of your schedule tab so we can work through it with you!

The Problem with Acceleration

The crux of the issue we've addressed with our update today relates to how we worked with project acceleration. This optional setting, when enabled, meant that any time a project or milestone was started it would cause any tasks without dependencies (ie, nothing deliberately blocking them) to accelerate and pull forward - meaning the suggested or "predicted" start date on the task would update to match the milestone. This sounds OK if all your tasks were planned to happen together, or if you used dependencies to set up your planned date offsets, but if you have staggered out tasks under a milestone to start and end in a waterfall (or staircase) sense without dependencies, we'd still pull them forward since there were no task-to-task dependencies configured, effectively front-loading those tasks to all happen together.

Accelerating without changing the project structure

In summary, if you plan tasks under a milestone to have a start date that falls after the milestone start date, we'll respect that difference, or "offset", when accelerating the schedule.

Note: If a project or milestone starts late then we do not push the children/tasks back to maintain the offset. We only predict late starts for the children once their planned start is actually in the past.

Accelo projects also have an "Auto-start" feature which enables milestones and tasks to be automatically activated if their dependencies are completed and the parent object is active. This works well - but hasn't been as responsive as some customers needed. For example, if you complete a task at 10am, the downstream task wouldn't auto-start until the next day despite all dependencies being cleared.

Now, there's a new option in the Dates Settings when creating a project, or configuring a project type, to turbocharge this feature with an "Instant auto-start" behavior - meaning that within seconds of that 10am task being completed, any downstream tasks ready to start will automatically activate, ensuring your project momentum isn't lost while users wonder which task to start next. 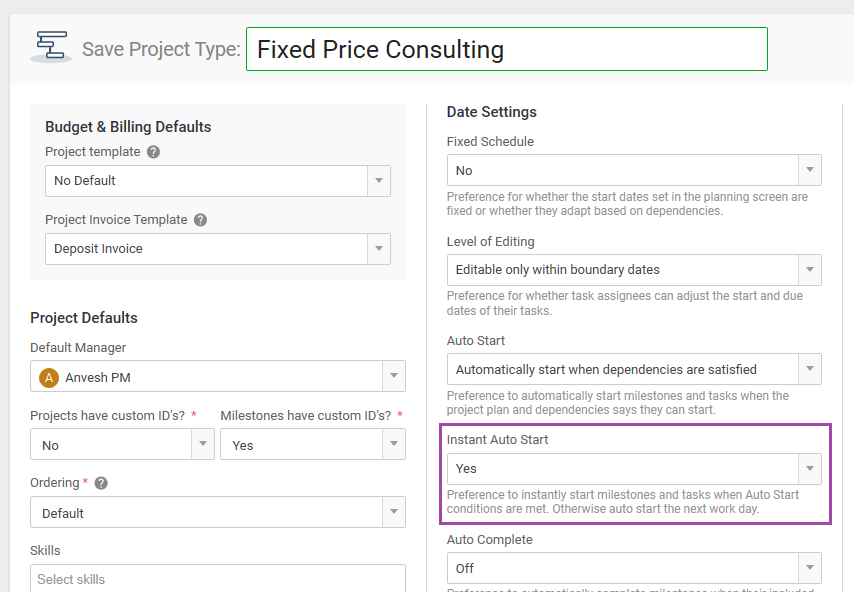 As you'd expect, this new setting will respect the "offset" improvement mentioned above - ensuring that work will auto-start in the planned sequence rather than all together when you've staggered out (offset) the start dates for your tasks within a milestone.

As always, we'd love your ongoing feedback and suggestions in this area to continue making project planning and management intuitive and useful for your teams - get in touch via support@accelo.com

Over the last few days we've had a number of…
8-Nov 2017
See how accelo can work for your business.
Try Free
How helpful was this page?
4.2 (Based on 11 ratings)
Accelo uses cookies to give you the best possible experience - by clicking 'Continue' you agree to our use of cookies. Refer to our Privacy Policy for details. Continue