LabTech (now known as ConnectWise Automate) is one of the more popular RMMs in the market, in large part because of its extensibility. LabTech features a very thorough scripting language, the ability to use (and set) user defined fields, and to extend the administration control center and endpoint agent with custom written plugins.

As a by-product of the near endless customisation that can be created with LabTech, there are thriving communities of developers and MSPs who have written plugins that cover a wide range of enhancements, increasing the value that LabTech offers it’s partners.

The team at Insane Technologies from the Gold Coast (Australia) are one of the many LabTech partners who had invested a lot of time and money into fine tuning their RMM, however as much as they loved LabTech, they battled with ConnectWise Manage (formerly ConnectWise) as their PSA.

“What was really starting to frustrate me, was that here we are, a technology consulting firm, and we had clients who were using software to run their businesses that seemed faster and more user friendly”, says David Rudduck, Managing Director of Insane Technologies. “But the straw that broke the camel’s back was when one of my clients, a self-confessed computer luddite, showed me how easily he and his team could log jobs on their mobile phones."

It was at this point that the team at Insane decided it was time to look at alternatives and break out of this love-hate relationship. David knew that lot had changed in the last 10-15 years in the industry - with SaaS platforms and true cloud solutions delivering much better user experiences at lower cost - and he hoped that MSPs and VARs are no longer limited to two or three legacy PSA’s to run their businesses.

After asking around through their peer groups, it was suggested they give Accelo a try. The team fell in love with how quick and easy Accelo was to use. “It was night and day” says David, comparing Accelo to the incumbents. “The general user interface was fresh, innovative and fast, as was the mobile application, and my project team could build out full project scopes during the proposal stage that flowed all the way through to the delivery of the project.”

But there was a catch: there was no integration between Accelo and LabTech!

The Insane team considered moving to one of the other RMM solutions that already integrated with Accelo, but soon realised that it would cost them a small fortune to rebuild all their scripts, reports and functionality in a new platform - not to mention the disappointment of losing some of the functionality provided by the 3rd party plugins they used was simply not available in the other RMMs.

As a team that that prides themselves on coming up with creative solutions to their client’s complex technology problems, Insane Technologies decided to solve the problem for themselves: integrating both systems together by combining LabTech's plugin extensibility with Accelo's open APIs - and thus AcceloSync for LabTech was born. 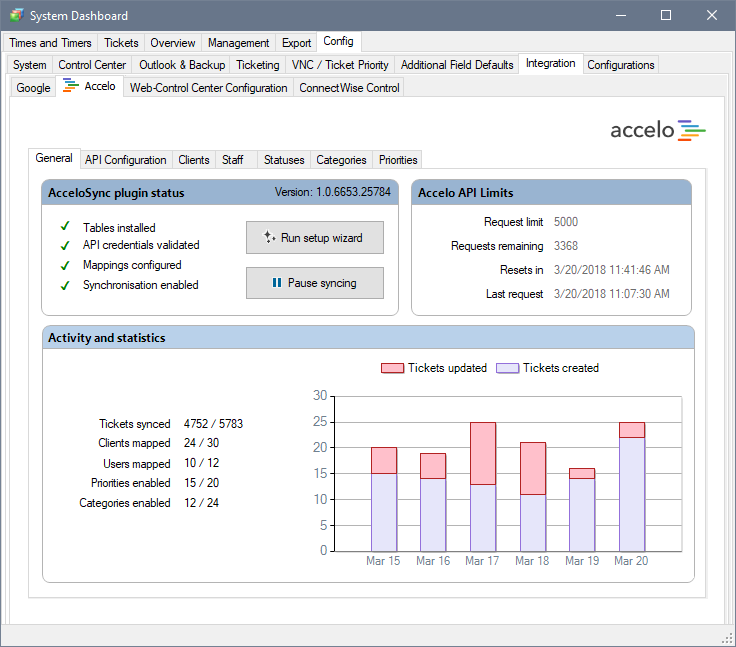 Hearing similar cries of pain from other MSPs, David, Grant and the Insane Technologies team decided to share their hard work with other LabTech partners by listing the plugin at Plugins4LabTech.com - a well established marketplace for 3rd party LabTech plugins.

“We just wanted to be able to help other MSPs break free from the shackles of the big two predominant PSA’s but still retain the investment they’ve put into their RMM platform”, says David. “We’ve got a couple of other ideas up our sleeve to enhance the integration and to leverage Accelo’s API to do creative things for our MSP and anyone else who wants to join us on the adventure!”

Now, any MSP who's loving LabTech but yearns to use a modern PSA platform can now have their cake and eat it too! Simply sign up for a free trial of Accelo at signup.accelo.com and then buy the AcceloSync plugin and you'll be good to go!

Additionally, between now and the end of June 2018, you can use the promo code TRYACCELO when you subscribe to the Plugin and you'll save almost 40% ($30 off the Plugin retail price of $79/month).

The Wellness Upgrade Your Employees Need

Whether you're an accountant, engineer, architect, designer, consultant, IT expert,...
25-Sep 2017

Our "Night of Automation" series made its way to SoCal!...
2-Mar 2019
See how accelo can work for your business.
Try Free
How helpful was this page?
4.2 (Based on 18 ratings)
Accelo uses cookies to give you the best possible experience - by clicking 'Continue' you agree to our use of cookies. Refer to our Privacy Policy for details. Continue