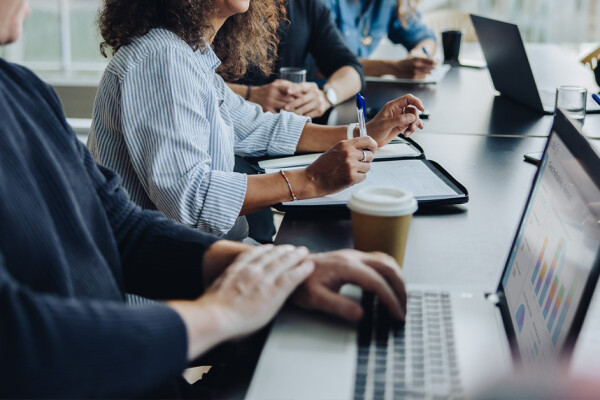 Empowered by Accelo’s robust automation, detailed reporting and helpful Activity Stream, Tegrita now enjoys the security of having the majority of its clients on committed retainers.

Tegrita is a marketing technology consulting firm founded in 2009. Its distributed team of experts provides marketing strategy, automation and execution services for businesses in various industries, from tech and manufacturing to financial services and healthcare.

Rolly Keenan came on as Tegrita’s Chief Revenue Officer in 2018 and was immediately aware of a tech stack problem.

They used an array of disjointed platforms, including JIRA for task management, a proposal tool and FreshBooks for accounting. To maintain time record alignment from projects to billing, the team had to log time in both JIRA and FreshBooks — an enormously inefficient process.

While they had a CRM, it was only about 5% utilized. And despite all this modern technology, the team still used spreadsheets to track employee availability and determine capacity.

Basic metrics were available, but it was nearly impossible for Rolly to extract meaningful real-time data from the mix of platforms the firm was using. A lack of company-wide visibility impacted his ability to lead effectively.

“There were a lot of ‘Go-get-’em tiger’ conversations,” he explains. “We were having to use last month’s numbers to advise. The team would get to the end of the month and go, ‘What happened?’”

Like its tech, Tegrita’s sales and contracting approach wasn’t helping the business grow. They were stuck in a common, problematic cycle of completing one-off projects at different rates, which made revenue unpredictable. Rolly knew the business wouldn’t be able to scale if it remained in this fruitless client work pattern.

The state of Tegrita’s sales pipeline wasn’t much better.

“Before Accelo, I could look at an account and have no idea whether they were our best account or we’d never talked to them before,” Rolly says.

With big plans to start consulting on new tech platforms, he knew they would need more complex contracting software and, ideally, recurring work. At this point, none of the business’s clients were on retainers with a monthly minimum commitment.

As CRO, Rolly’s biggest concern was cost efficiency. To avoid the expense of expanding Tegrita’s operations team to meet its ambitious goals, he aimed to leverage smart technology.

Within 60 days of joining the Tegrita team, Rolly started searching for a platform that could function as a CRM and task management tool, at the very least. When he discovered Accelo, he realized how much more was possible in one unified solution.

He appreciated the ease of managing tasks and creating statements of work (SOWs), but the most appealing facet of the platform was its built-in visibility. He describes Accelo’s Activity Stream as the “lynchpin” of his decision to move forward. With a 100% remote team, Rolly wanted access to all communication between clients and his team.

The CRM interface also made Accelo stand out from other platforms he was considering. He loves being able to see the entire account history, team effort and potential revenue of a lead at any time.

In my 30 years of work, Accelo ranks as the best CRM view of all time. How good your people are at entering information doesn't matter.
Rolly Keenan, Chief Revenue Officer

Tegrita’s technology expertise facilitated a smooth implementation. Acting as the internal point person for Accelo’s Professional Services team, the COO spent about 20 to 30 hours exploring the platform on her own. This initial discovery period made the time the whole team spent in Accelo’s training sessions much more productive, as they only needed to perfect their setup.

A few weeks later, they were using the platform to transition clients through the stages of the client journey. Thanks to a seamless integration, the team could easily accept tasks via Slack. Project managers knew exactly how to divvy up those tasks and carry through the appropriate legal terminology based on structured SOW templates. No unnecessary meetings or emails! They also had the newfound power to preempt problems before month’s end with the project progress and budget usage dashboards.

Since Tegrita’s team began taking action based on current numbers rather than historical ones, they’ve executed massive shifts in company and project structure.

The team, entirely comprised of contractors in 2018, has transitioned to majority employees. A focus on building an employee-first culture has driven collaboration and improved loyalty. Turnover happens less often, supporting a steady flow of resources and more stable client relationships.

“We have the same number of operations people we had before, and we’re more than double the size,” Rolly points out.

Automation has become integrated with every role. And only a small “manual risk” remains: when people forget to log time for tasks performed outside the platform — but that doesn’t happen much anymore.

As of 2022, Rolly says they’ve culturally and operationally caught up with the visibility and data quality of Accelo. Internally, the business has done a “complete 180,” and clients can feel the effects. For example, a client who uses Tegrita for email marketing and previously sent three emails a week could say they need 20 sent out this week. Instead of waiting to discuss whether it’s possible, the team can now agree on the spot and move work around easily. They also give precise timeline estimates because of Accelo’s automated time-tracking and forecasting reports.

“Their experience has become a ‘just-in-time’ feeling. They know they can say anything to Tegrita and even if it slows us down, we’ll take care of it.”

And although they want to be there for clients as much as possible, Rolly likes the security of being able to hold them accountable if necessary. Accelo’s visibility tools, like the detailed client history in the Activity Stream, make that easy.

The most impactful outcome of using Accelo for the past four years? 90% of the firm’s clients are now committed to using a set number of hours in at least one quarter, and 60% of its revenue comes from clients who have committed to four consecutive quarters. With reliable revenue, scaling is not only possible for Tegrita, but already happening.

Try Accelo for 14 Days
Fast and easy setup No credit card required
Get Started Now
Schedule a Live Demo
Tailored to your business All questions answered
Request a Time
Accelo uses cookies to give you the best possible experience - by clicking 'Continue' you agree to our use of cookies. Refer to our Privacy Policy for details. Continue