What is the Work Approval process?

It's an optional step when managing an issue (or retainer, or project) which enables the user to review, edit and approve activities for invoicing. Even if you don’t want to invoice for that issue, it’s handy for spotting time entry mistakes or moving some time to be non-billable.

You can move activities around between the issue and it’s sub-tasks too - handy when users forget to put time against their tasks.

Why did it change?

Ultimately, it was technology that forced us to abandon the older style approval tool. For some time we applied band-aids to keep it going, but it was finally time to bite the bullet and let this older one go:

Fortunately we already had the newer style Approval tool already in use with Projects and Retainers, so were able to “drop it in” with some minor adjustments.

As Accelo has evolved we’ve found ourselves in a very competitive landscape, where we have to embrace new web technologies. These ensure Accelo maintains browser performance, and unlock powerful new user interface features which customers begin to demand!

Angular JS is one particular technology we’re embracing, and as such some older screens just aren’t compatible. When we first started using Angular, we were overhauling some major areas - Projects and Retainers - so it made sense to upgrade the Time Approval tools there. With our latest Angular library upgrade, the older approval tool (only found in the Issue module) became completely unusable.

What’s better about it?

1.  Tasks on each issue/ticket are now visible in the approval screen - so any activities linked to a task are now grouped accordingly.

2.  Changes are now saved automatically, in-line, so you can see all the data in real-time.

3.  Consistency: This screen is almost identical to the approval tool used with the Projects module and the Retainers module. One significant change here: If an issue is linked to a retainer, you'll need to use the Retainer Approval process to review the activities. Fortunately there is a handy link from the Issue Approval screen regarding this. 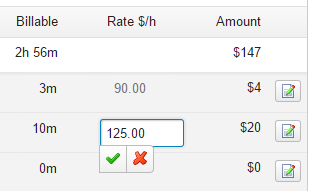 5.  More details for invoiced activities, such as: Will it get more coolness?

Yes! Because it’s running on new technology, it is much easier to extend..

Can I use the old approval tool?

Unfortunately no - with the new AngularJS technology running, the old screen is not operational so we can’t leave it there as an alternative.

Are you loving Accelo, but have questions about a particular…
6-Jun 2018 • Product

Attack of the clones!

Despite being a long weekend in the States, we still…
29-May 2018 • Product
See how accelo can work for your business.
Try Free
How helpful was this page?
4.2 (Based on 11 ratings)
Accelo uses cookies to give you the best possible experience - by clicking 'Continue' you agree to our use of cookies. Refer to our Privacy Policy for details. Continue