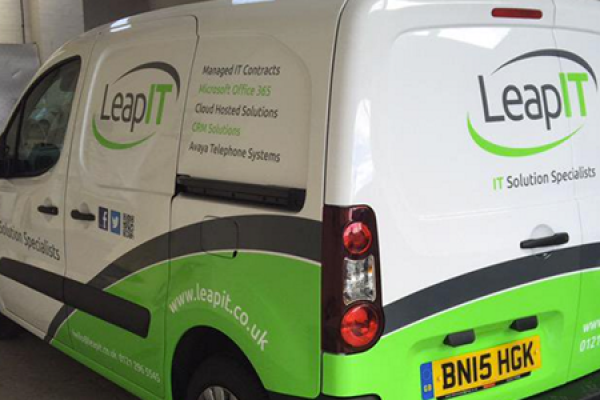 LeapIT’s team wasn’t aware of how much work they were doing for free until they started tracking tickets with Accelo. The platform supported the business’s major expansion by simplifying client onboarding and service renewals.

LeapIT has been a local gem in Worcestershire since 2001. From the moment CEO and Founder Stuart Watson opened its doors, demand has remained high. And, like many business owners, Stuart struggled to keep up.

He describes how rough those early days were.

“I felt so overwhelmed. I was stretched so thin just running the business day to day that I had no time to grow the business. It just made sense to start hiring additional people.”

With a steady flow of clients, Stuart felt the immense pressure to expand the business’s geographical reach but didn’t have the support to do so. It didn’t help that he was using what he describes as a “flat” database system with virtually zero scaling potential.

The feeling of overwhelm, plus an offer from his former colleague Chris Boehm, prompted Stuart to seek service contracts further afield. The two friends joined forces in 2014 and, luckily, Chris had a solution for Stuart’s frustrations: Accelo.

“There were no tools that could really compare with the simplicity and utility that I saw with Accelo,” he says.

But the ease of use came with a big reality check. The LeapIT team discovered how much work they’d previously been doing for free: the equivalent of five to six hours a month! It turned out that the support staff had been unknowingly providing additional services to customers who hadn’t paid for that dedicated time.

They were throwing additional time away on other tedious tasks:

Moving to a new software took some “real heavy lifting” in the beginning, in Stuart’s words, because of the core business systems LeapIT needed to change.

First up was deriving a better process for managing recurring client work, which largely consists of domain renewals.

“We’ve now set it up in the Retainers module to be entirely automated,” Stuart explains. “It fires an email at 60 days, 30 days, 15 and 10. They can reply to that email and Accelo waits for that reply, reads their response, works out the cost and sends it to them. It’s only right at the end when someone has to renew the domain manually.”

Next, they needed to get those 43 client onboarding steps off their plate. The answer was to set up a series of triggers in Accelo to automate intake. Once a client is onboarded, their projects are created using easy templates.

The team also found that using Accelo made onboarding new help desk staff quick and easy. With the help of internally recorded videos, new employees can be up and running in a few days.

Finally, they saw an opportunity to improve accounting and billing with Accelo. LeapIT took advantage of the Xero integration, collecting client payments via direct debit instead of waiting for manual payments.

Stuart started monitoring the number of hours his team spends per client account. Now, rather than guessing when to hire a new team member or holding onto a client who’s costing the business, he can review profitability data before making a critical move.

“For any month period, we can go to any client and say ‘Right, you logged eight hours in support last month, you logged two hours, you logged 20 hours’... and so on,” he says. “It gives you an idea of how profitable the client is, so that helps us with our business decisions.”

He found that being armed with real data means clients are more likely to respect changes.

Eight years later, LeapIT turns to Accelo for just about everything.

“Every time we’ve come across a business issue, we’ve gone to Accelo to work out how to fix it, and every time, there’s something in there that will do that for us.”

By building our company with the right foundation and the right internal software to support those efforts, we have been able to scale efficiently and productively.
Stuart Watson, CEO and Founder

The jump in efficiency was initially striking and has remained significant.

In the first two years after adopting the software, LeapIT doubled in size and increased ticket turnover by 50%. That number has held steady at 20% YoY. As of 2022, the business is closing over 8,500 tickets a year and continues to get more efficient about handling each one.

The visibility Accelo provides has brought massive cost savings, too. Because of the automation the business has implemented, Stuart estimates that he saves £60,000 per year that he would otherwise pay in the form of salaries for two additional employees.

Perhaps most importantly, Accelo has reduced Stuart’s stress and energized him to achieve his business goals. He loves no longer having to waste time searching for information about a given project.

“Accelo has given me back the time to strategize and plan and work on the business rather than in the business — and that is a great position to be in.”

With the help of Accelo, LeapIT now serves customers throughout the UK.

“We have grown more confident and ambitious about the product and about our role in the market and are really looking forward to the future with Accelo.”