We've got some pretty neat improvements to fill you in on below, while our wider product teams continue work on a new Create Ticket process and more flexible Relocate Activity feature - standby for updates on those soon.

Rates for Tasks on Tickets!

This subtle improvement adds a lot more power to the tickets module, as it means you can have different billing rates within a single ticket/issue. Now when creating a task on a ticket, there's an option to select a rate for work which applies only to that task. 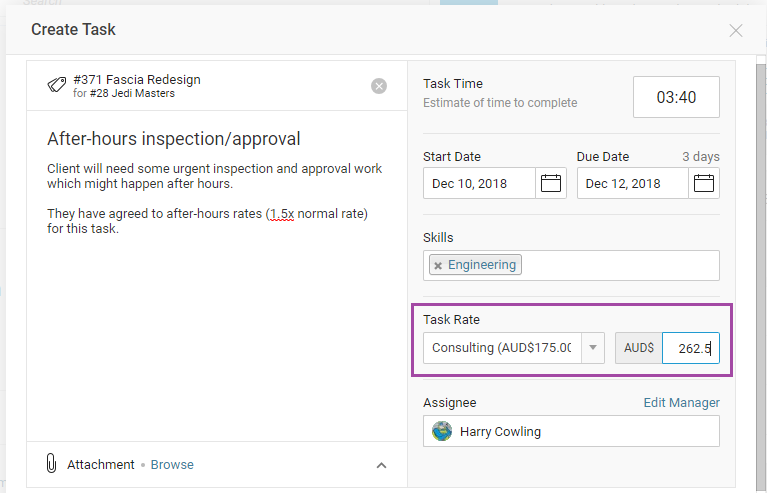 After hours of sleuthing from our engineers, we tracked down the edge-case which was causing some PDFs attached to emails sent from Accelo to become blank. It only affected files which had ampersands used in the filepath (such as the company or project name) and when fetching metadata about the file, the ampersand caused the mimetype information to be unavailable, which rendered the PDF content empty. We're now handling this in a more robust way, so we don't expect this problem to occur anymore.

Merging issues/tickets, from the View Ticket screen, is now easier than ever with a quick and simple pop-up experience allowing you to search for 1 or more issues to merge in. There's also a link to access the full (classic) merge issue experience too.

A feature which has long been available in the Weekly Timesheet view, helping you quickly log time against emails and notes which have been captured into Accelo without any time spent. Now you can quickly click on the suggested time to have that apply. Note that the suggested increment is a global setting configured by your admin user. 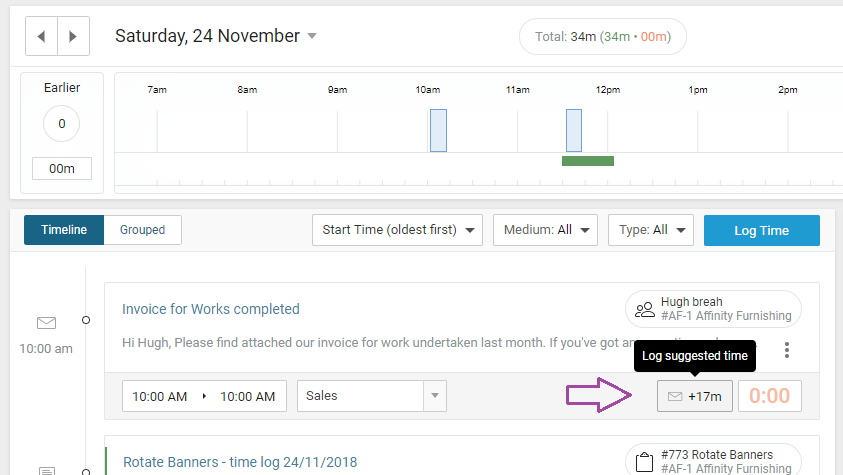 The Quick Reports available within the Ticket/Issue Dashboard have a date range selector which was a bit limited. We've opened this up to have more pre-defined date ranges plus the option to choose a custom range - so you can get exactly the view you need to manage your service & support more effectively.

Configuring your retainers to create tasks based on triggers is now possible. When the trigger rules are satisfied, Accelo will build the task against the current period. These tasks are in addition to the regular tasks that are templated in the retainer settings!

By adding an outline to the My Schedule screen for the days which you've configured as working days - and the hours you usually work on those days - it's now easier to see when you're over or under scheduled.

Our new integration with Expensify wasn't handling cases where an expense has been split inside Expensify. We're now recognizing the split and importing the changes and the new expense into Accelo correctly.

Many of the tools for importing data into Accelo were just checking for admin user level, whereas we have now built more specific permissions for the various data imports so that you can give your team members permission to import sales, tickets, invoices and more as appropriate.

Due to popular demand, we have restored the ability to define the task manager (which is different to the assignee) when creating a task. Previously it was being set behind-the-scenes and had to be updated from the View Task screen.

When our QuickBooks import process identifies a QB Customer which isn't linked with a contact in Accelo, but does identify an Accelo company record with the same name, we will now establish a link between that QB Customer and the company's Default Billing Contact - rather than just using the first contact created under that company (as we were doing previously).

It turns out that granting a group the permission to view a specific project/ticket/sale/etc was not working for contractor-level users within that group. This glitch has now been fixed.

In a services business, where there's often multiple projects on…
31-Aug 2018

Want to find out how to simplify your invoicing process?…
20-Jun 2017

It's time to update you on the progress of our…
14-Oct 2020
See how accelo can work for your business.
Try Free
Accelo uses cookies to give you the best possible experience - by clicking 'Continue' you agree to our use of cookies. Refer to our Privacy Policy for details. Continue