It's been a big couple of weeks for our developers and product managers, as we've shipped some awesome Retainer Insights, and recently, improvements to permissions around cost & profit data. Though these were our main initiatives, our team found time for smaller, but just as helpful, improvements.

View Timesheet Report for one Retainer

For users wanting to view a Timesheet Report focused on activity in just one retainer, you're in luck! We've added this handy option into the toolbar when viewing a retainer. By default, the report will load with the last 12 months of time and activities, but it can be expanded to cover a longer period of time if you adjust the time range in the report.

For those who are participating in the beta program for our iOS app, you'll notice the upgraded create and edit expense flow. This update parallels the work released in our web app a couple of months earlier - making it faster to log expenses while handling more accounting detail like the item codes, tax, and vendor automatically based on the expense type.

Fix for datestamp on captured emails

Our team was alerted to some examples of emails being captured into Accelo with a Logged For Date which didn't match the Created Date. Once this was brought to our attention, we got to work with fixing it. We have since isolated the problem and it's now fixed!

We also addressed an anomaly with tasks sometimes appearing in the wrong column of the Deadline board if the user's timezone was offset from the system timezone by more than 12 hours. Seeing today's tasks appear under tomorrow (or yesterday) was not ideal, but it has since been corrected.

If you're a lover of the Firefox browser, you probably noticed odd scrollbars that appeared in various parts of the Accelo app for a week or two. This was due to some unforeseen changes in Firefox's browser standards and it took our team a little while to make the necessary adjustments to our app. Fortunately, we addressed this and it's now smooth sailing!

Some feedback on Accelo's permissions encouraged us to soften the rules on who can re-open and close retainer periods so now a user who doesn't have Financial Visibility set on their profile will be able to take those actions (provided they also have the close & open period permission).

This small but sensible change is found when creating an invoice. Previously, the confirmation focused on congratulating you for billing your customers (and earning money). As a team, we decided that it would be more helpful to incorporate a message around the next steps. In this case, we updated the window to showcase that the PDF is being created and is on its way. 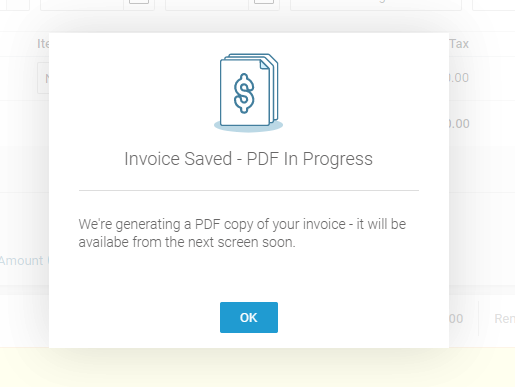 Accelo Named Best Small Company to Work For in Colorado

We're thrilled and honored that Accelo has been recognized among...
16-Jan 2020

Wow, it's been a big few weeks with some significant...
26-Feb 2019
See how accelo can work for your business.
Try Free
How helpful was this page?
4.2 (Based on 18 ratings)
Accelo uses cookies to give you the best possible experience - by clicking 'Continue' you agree to our use of cookies. Refer to our Privacy Policy for details. Continue