The weather is heating up here in the US and so are the feature releases at Accelo. The teams have been hard at work delivering on our quarterly and long-term roadmaps.

Some of the features and enhancements recently released include:

We have released some really great feature enhancements in the last month, but we're not done. We have upcoming releases that are sure to delight you. Watch for the following coming to the Accelo platform soon:

We are happy to announce that we are making some significant updates to the Salesforce integration. This is a key integration for the Accelo platform and for our clients, which drove our decision to prioritize gracefully handling rate limits, allowing syncing to begin after a failed import and improving the logging functionality.

The Salesforce integration allows users to import and sync their data between Salesforce and Accelo. That is done using Salesforce’s public API which, like most modern APIs, uses rate limits to prevent users taking advantage or impacting performance. There has been an existing bug in the integration that causes it to miss syncing some records. We have resolved this issue by expanding the integration to handle rate limits automatically by pausing the import until the limit period passes, and then resuming where it left off.

Allow Syncing to Begin After a Failed Import: Live

The Salesforce integration requires an initial import to be successfully completed before its ongoing sync of new and updated records takes effect. This was done intentionally to ensure that the import’s data mapping steps have been completed (so that data is synced accurately), and to prevent race conditions where an object is both imported and synced at the same time. However, there was an existing bug which caused the import not to start again. To address this issue, we expanded that logic so that in addition to syncing once an import has completed successfully, it can begin when the import has failed. The result is that users will have complete data sets when an import has been completed.

We are adding additional logging to the Salesforce integration in an effort to provide you with better support when you have questions. To empower our Support team, we’ll expand our logging to include details for both successful and failed attempts, and to provide more specific information on the record. Those details will include:

One thing to note on these improvements to the Salesforce integration: imports may take longer since we are ensuring that the data is captured and complete.

We are happy to announce that we’ve expanded our HubSpot integration to allow you to take advantage of their new customizable lifecycle stages. Read all the details in this Accelo Community post.

The gist of this enhancement is that Hubspot has changed the permissions on their lifecycle stages functionality, allowing users to modify those options to better reflect their company-specific processes. We have updated our Hubspot integration to sync the new statuses with their Accelo counterparts and allow you to use them to define exactly when records should be synced between the two systems.

New Status Board View for Tasks

We are preparing our new task boards for beta, starting with a status board. The status board will function similarly to a Kanban board and allow users to move their tasks through customizable columns to create high visibility on status and progress of work. The new status board view builds on the work we released earlier in the year to enable custom task statuses with this new board supporting all of your new statuses!

Here's a teaser of the new boards. Be aware that we are still finalizing the card design and detail so the look and feel may change slightly between now and release. 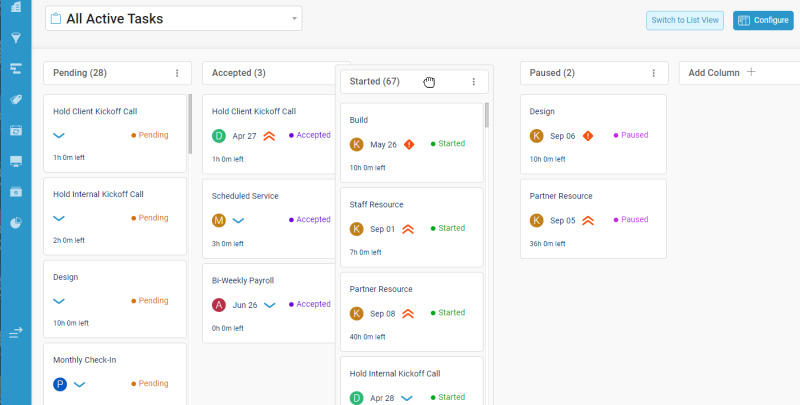 Keep an eye out for invitations to be part of the beta testing phase. We look forward to getting your feedback on the new status board and appreciate your time and engagement.

Please use any and all of the methods below to engage with the Product team as we move forward into the second half of 2022 and into Accelo's future:

Get the latest product information and engage with other Accelo users and support in the Accelo Community. Filled with insightful discussions, support Q&As, product updates, and blogs, Community helps you find the best ways to use Accelo to manage your client work. Connect with other professional service providers to share ideas and learn ways that they have successfully managed their client work.

It’s something you interact with every time you use Accelo,…
17-May 2022
Try Accelo for 14 days
Fast and easy setup No credit card required
Start Free Trial
Schedule a Live Demo
Tailored to your business All questions answered
Get a Free Demo
Accelo uses cookies to give you the best possible experience - by clicking 'Continue' you agree to our use of cookies. Refer to our Privacy Policy for details. Continue